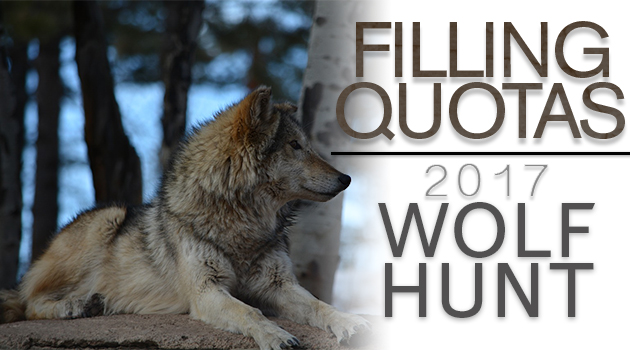 After a nearly a decade long hiatus Wyoming is finally back on track with seasonal gray wolf hunting kicking off in 2017 (we also hunted Wyoming wolves in 2012).  After not hunting wolves for so long in the Cowboy State we have a massive overabundance of them roaming the hills and valleys, which is the reason so many of the wolf quotas were filled so quickly this past hunting season. The 2017 wolf season inside the “trophy” zone opened on October 1st statewide. As a result of so many wolves more than half of the area quotas did not even last through the month of October. Of the twelve open wolf areas six of them filled their quotas with only twenty-five days or less of hunting.

I personally had a wolf tag in hunt Area-4 (Meeteetse Area) where the season failed to remain open for even four full days. You are welcome Wyoming Game and Fish for the $20 donation, every little bit helps I guess. I think it fair to say that if a quota is filled in less than four days, we simply have too many wolves. Hunt Area-11 (South Wind Rivers) was even shorter, where four wolves were killed on a three-wolf quota on the first and only day of the season! Newsflash- I think we need higher quotas. And I’m not the only person who thinks this, the Game and Fish as quoted in a local newspaper article, “there’s still a surplus of wolves, well beyond the minimum of 100 wolves and 10 breeding pairs that the state has agreed to.”

As of the end of December the only three wolf seasons still open were Areas 6, 7 and 8 in and around the Jackson Hole valley where the wolves are very difficult to kill mostly due to the tough hunting conditions, remote access and low hunting pressure in the area.

There is some very interesting statistical data nested inside this report as well. More evidence that predator population control and management often boils down to simple math and economics, contrary to popular belief and basic uneducated logic on the subject. The fact remains, wolves, grizzly bears and mountain lions will die, we just seem to be fighting over who is going to do the killing and how we are going to pay for it. A simple case in point, in California where cougar hunting has been outlawed for decades, the state of California is now killing more mountain lions than they ever did during an open cougar season so many years ago. And instead of generating revenue from cougar hunting licenses, tags and permits, California is now paying millions of dollars for state sponsored under the radar, politically correct predator control efforts-a financial swing of literally millions of dollars, and not to the favor of the taxpayers or sportsmen of California. When it comes to wolves, Wyoming is not much different.

Here are some stats to back that statement up. In 2016 Wyoming did not have a wolf hunting season but 113 wolves were still removed from the state, killed by wildlife officials through damage control efforts. This cost the state no less than hundreds of thousands of dollars. Not one single wolf tag was sold in Wyoming in 2016, leaving the sportsmen of the state of Wyoming to pick up the tab for the location and removal of the 113 problem wolves.

Contrast this with the 2017 season where over 2,517 wolf tags were sold for a revenue generation of roughly $132,000. Not only did the state generate more money in this scenario but also fewer wolves were actually killed in the process, a very hard fact and reality for some to absorb. With a hunting season, a total of 72 wolves were killed, 42 in the trophy zone and 30 in the predatory zone. The long and short of it, nearly 30% fewer wolves are actually killed with a hunting season versus no hunting season for the predators.

What does this all mean? Well to a logical and reasonable person, it means that wolves will die each and every year, period. With or without wolf hunting wolves will be killed regardless. That’s a fact, and it doesn’t just go for Wyoming’s wolves, it also applies to our grizzly bear populations as well. The research and data also shows that with a hunting season not only are fewer wolves actually killed but the state makes more money and the “system” works much more efficiently in the process.

This short two-year test shows that hunting predators not only generates millions of dollars but also kills fewer predators in the long run than not hunting them at all. This might be a very tough pill for some to swallow but, facts are facts, which can be inconvenient to your argument sometimes.

Wolves have cost the sportsmen and taxpayers of Wyoming literally tens of millions of dollars over the past two decades and counting. And now, you the nonresident hunter, are about to get stuck with the bill for the destruction the wolf reintroduction experiment has caused Wyoming’s wildlife. We will outline those facts and data in an e-news article coming to your inbox in February.

-The wolf “trophy zone” in Wyoming is 8,248 square miles.
-In totality 30% more wolves were killed without a wolf hunting season (113 vs. 72).
-Of the 12 total wolf hunting areas, half (6) did not even last 30-days before closing with filled quotas.
-All legal harvest and illegal human-caused gray wolf deaths that occur during an open hunting season apply to the total wolf quota.
-Nearly 25% (7) of the wolves killed in the “predator zone” (30) were killed between Rawlins and Casper-more than 200 miles from Yellowstone Park.
-Wolves were reintroduced into Yellowstone nearly 22 years ago.
-Wyoming only agreed to host 100 wolves or 10 breeding pairs, which was exceeded long ago.
-It is widely thought that Area-4 alone could contain more than 10-breeding pairs.
-During the 2017 hunting season Wyoming sold over 2,500 wolf tags for an estimated total revenue to the Game and Fish Department of over $130,000.
-The wolf quotas in Areas-4 and 11 were filled within fewer than four days of the opener.
-Nearly 50% less wolves needed to be removed for damage control efforts with a hunting season versus no hunting season (113 in 2016 versus 58 in 2017).
-The wolf “predatory zone” in Wyoming exists in an effort to minimize the state from the liability of reimbursing livestock producers for predatory losses.

Why A New Auction Site For Gunrunner?    Some have asked why we “changed” to…

How To Use Our Site From Bidding To The Purchase

Great you’re here on our Gunrunner Auction site!  You’ll find this auction site to be…

Consigning Firearms On This Site:

We would LOVE to sell your firearms, ammunition and accessories on this site!   We…